[1]  Rev Dr. Cheryl Stewart Pero, the second Black Lutheran woman ordained in the Lutheran Church in America, the first  Black woman in the ELCA to receive a doctorate in 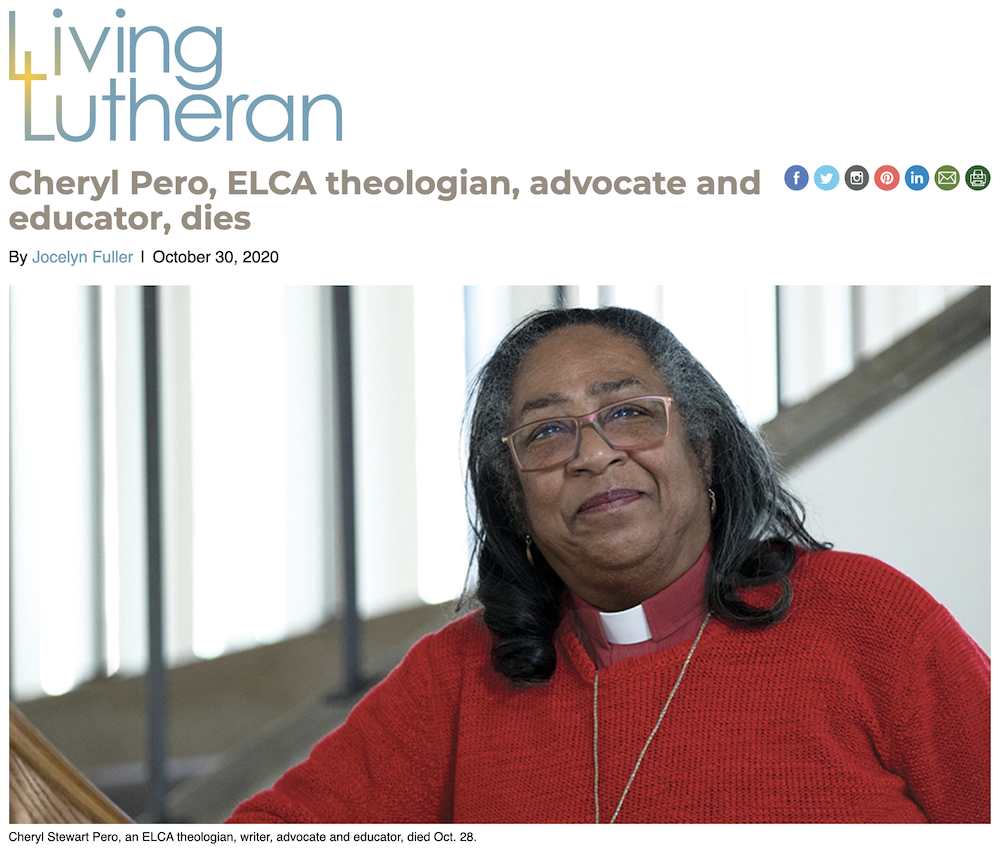 New Testament studies, and a leading scholar, pastor, and community builder, died on October 28th, 2020.   For a woman who encouraged and empowered so many others, JLE presents two tributes in her honor.

[1] Jamaican Womanist Theologian Dr. Marjorie Lewis writes, “for Caribbean women, the point of departure for doing theology is the iconic figure of Nanny of the Maroons”.  Nanny of the Maroons, along with her brothers (sounds familiar) waged a successful guerrilla war against the colonizing British in the 17th century.  Nanny and her daughters, those who followed, had to face the complexities of claiming agency in the struggle for freedom and fullness of live, fighting for the community with their heart, mind, soul, and body while navigating the perils and possibilities of shared leadership. This Caribbean womanist theological perspective, perhaps not fully articulated,  was embodied and actualized in the life and work of Dr. Cheryl Angela Stewart Pero.

[2] It is well known how much Cheryl embraced her Jamaican heritage. It is also known how much she fought against colonizing ways of doing theology and theological education. We know too how much in her Nanny Maroonish ways Dr. Cheryl fought for the community – with her heart, mind, soul, and finally her body. And we know she fought this fight alongside her beloved Pete, professor of Systematic Theology at the Lutheran School of Theology in Chicago.

[3] But before there was a Pete and Cheryl, there was a Cheryl. Dr. Chery Stewart Pero was a theologian in her own right. I first encountered the Rev. Cheryl Stewart before she became Rev. Cheryl Pero in some her writings in the 1980s. She was engaging in theological discourse even before she received her Ph.D.

[4]  Of course, her work was articulated not only in writings – as often that seems to be the measure appreciated by the academy – but her work can be and will be measured by the lives she touched. Often, we don’t know the impact of one work one’ calling, one’s life until we are called to glory and in retrospect. Cheryl gathered the women in the Conference of International Black Lutherans – the African and African diasporic teaching theologians of the Lutheran Church, once in Zimbabwe. There we met Margaret Obaga. What was not known was that years later sister Margaret from Kenya would become Dr. Obaga teaching in Germany.  More women would follow,  shaping the landscape of Lutheran theology. We think of Dr. Elieshi Mungure now working in Geneva with the Lutheran World Federation making a difference and Dr. Monica Melanchton teaching in Melbourne, Australia.  Dr. Cheryl Pero in her own way influenced in a sundry of ways the means by which African and African diasporic women thought about and embraced the importance of sisters in the academy and beyond. Dr. Cheryl Angela Stewart Pero’s impact is global.

[5] Like Nanny of the Maroon, Dr. Cheryl of the Chicago (or is it New York), has brought more sisters following the footsteps or perhaps the smoke rings of this Caribbean womanist theologian who yelled for a Womanist way to be taught in the academy and in the community*. The work remains.

[6] Dr. Selenir Kronbauer, professor at EST school of theology in Brazil who attended another CIBL conference in 2005,  wrote the following upon the news of Dr. Cheryl’s death:

“The energy of the ancestry is strong with the arrival of the warrior Dr. Cheryl Pero.  Where ever you are, Dr. Cheryl, you will continue to emit joy, courage, and the wisdom for us to never give up on dreams, and to continue the pursuit of justice, and equal rights for Afro descent and other excluded people”.

Rest in peace dear sistah Rev. Dr. Cheryl Angela Stewart Pero. Your story and legacy remain in our lives – and for generations to come.

*Note: These remarks were first presented at the Memorial Service to honor Dr. Cheryl Pero, November 2020.

[1] Cheryl Stewart was a student of mine many years ago, when I served as Chaplain and Lecturer in Religion at Wellesley College.  I know from what she told me years later that she was wary of me when she first arrived on campus, because she had been raised as a Missouri Synod Lutheran and I was some other kind of Lutheran Pastor.  Even more troubling for her, she told me later, was the fact that I had the reputation of being a “liberal Christian” who was against the war in Vietnam.  Also, in those days, as she well knew, I was involved with some student leaders who were pushing the College to admit more Black students.  When we one day did get to know each other for the first time, however, such issues never came up.

[2] Front and center, rather, was the personal crisis that she was enduring at the time, which was not unlike the issues many young women at Wellesley had to address in those days.  Of interest, in retrospect, is this striking fact:  she and I never talked about any issues regarding her being Black and me being White at the then egregiously White college where we both found ourselves, even though I had on a number of occasions massaged our conversations in the direction of such a discussion.  Then I didn’t see her for some time.  She only rarely attended the college chapel where I presided.  But then, to my surprise, toward the end of her junior year, she made an appointment with me.

[3] Much later, she talked about that conversation in public.  She wasn’t at all sure about what she wanted to do with her life after her graduation, she said.  At one point, in a subsequent appointment, I felt comfortable saying to her:  “Cheryl, have you ever thought about becoming a pastor?”  She stared at me as if she had seen a ghost.  “Never,” she said, emphatically.  A couple of months later, she made another appointment.  “I want to tell you,” she said, “I have decided to go to seminary.  I have decided to be a pastor.  I want to thank you for putting that idea in my head.”

[4]  Many years later, she told that very story to a room full of people at the Lutheran School of Theology in Chicago, during the discussion after a lecture that I had just given.  Everyone applauded.  I was in tears.

H. Paul Santmire is a retired ELCA pastor and theologian now living in the Boston area.

The Rev. Dr. Beverly Wallace is Associate Professor of Congregational and Community Care at Luther Seminary.