Review: The Upswing: How America Came Together a Century Ago and How We Can Do It Again by Robert D. Putnam, with Shaylyn Romney Garrett.

[1] Where do you pin your hope for the future of democratic self-governance in the US, particularly in the wake of the January 6 attack on the Capitol?  Hope is indispensable to faithful living and enjoys a primary role in Lutheran theology.  Yet in these broken times, any hope about the future of American democracy is exceedingly vulnerable to partisan embrace.  What the Republican right hopes for lies miles away from what the Democratic progressive left hopes for.   Moreover, hope rests upon convictions about the future which must be modest and tentative since, after all, the future has not yet arrived.

[2] In short, who knows where our political future is headed?  Dante, in the Inferno, famously condemned those who would foretell the future to walk forever with their heads turned back over their butts.[1]   The message was clear: the future belongs to God.  But what if, in this information age, social scientists could collect enough data to chart the past one hundred years of political movement, and discern trends that would permit reliable projections about the health of our democracy into the future?

[3] According to Robert Putnam and Shaylyn Romney Garrett, evidence from a broad variety of sources, including many rigorous social-scientific studies, has uncovered what might be termed two successive trends—first, an “upswing” from 1900 to the 1960s, then a “downswing” from the 1960s to the present.  These slopes are preceded by roughly the same slopes in the 19th century, suggesting something like a recurrent pattern in American history—and the possibility of a new “upswing” during the next fifty years.

[4] What these slopes measure is the rising and falling of community-centeredness to individualism and back again, or what they dub the “We-I-We” oscillation.  A first community-oriented upswing occurred when Abraham Lincoln initiated an era of restoring the Union following the Civil War.  Then a number of trends signaled a downswing into the Gilded Age, with its unbridled individualism and inequality.  At the end of the 19th Century, the Progressive Era launched another upswing towards collaborative, non-partisan politics. That upswing dramatically lost steam in the 1960s, plunging into a dispiriting individualist downswing that has played out for the past fifty years.   If these oscillations were reliably periodic, they suggest we are due for another upswing into collaborative, community-oriented politics.

[5] Putnam and Garrett measure these trends up and down in four broad domains.  Chapter 2 addresses “economics”, where they chart rising economic equality from the Progressive Era into the 1960s (the “Great Convergence”), and then the steep decline into inequality from the 1960s on (“The Great Divergence”).  Chapter 3 focuses on “politics”, narrating the rise and fall of collaboration in Congress as rounded out by quantitative measures of polarization, alienation, cynicism, and the like.  Chapter 4 attends to “society”, engaging Putnam’s lifelong work on social institutions and social trust.  Chapter 5 charts “culture,” the changing beliefs, values and norms which undergird the tensions between individualism and isolation, on the one hand, and community and solidarity on the other.

[6] Each chapter has its own methodological emphasis, ranging from the charting of dry statistics (Chapter 2) to compact retellings of history over the last century (Chapter 5).  Indeed, Putnam and Garrett regard their work as an exercise in ‘metahistory’—looking for patterns in the flow of singular actions and events, with further support provided by quantitative measures of all kinds.  The text is densely packed with data, but in a surprisingly readable presentation (for which Putnam gives ample credit to Garrett).  The book demonstrates that data from social scientific measurement need not be deadweight impeding narrative flow. 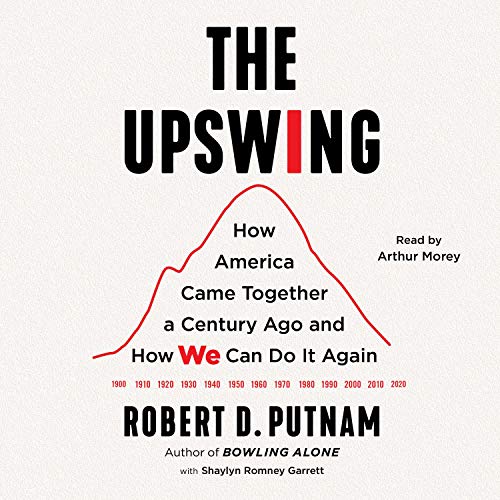 [7] The argument is heartening, in that it imposes a plausible and easily grasped pattern on the bewildering complexity of U.S. history over the past 120 years.  Indeed, the argument reduces neatly to a symbol–a graph depicting upswing and downswing as a surprisingly and pleasingly symmetrical mountain.  But the slopes of the mountain are not really that smooth.  Mindful of an overemphasis upon white males, Putnam and Garrett devote a detailed chapter to Black people (Chapter 6) and another to women (Chapter 7).  While women were largely included in the “Great Convergence” or upswing kindled by the Progressives, Black people were not.  For them, the national growth towards community meant exclusion through Jim Crow, in a complex and dispiriting history.  The conclusion is not surprising, but it is helpfully supported by copious data lest the reader have doubts about the persistence of deeply engrained inequality of outcomes for White people and Black people.  The up-and-down mountain, it seems, is deeply fissured by gorges and crevasses.

[8] Still, the book centers on hope, for the authors make no secret of their own political hope that the past century of history will generate the confidence needed to upend the current trough of inequality and isolation.  “Today we find ourselves living in an extremely polarized, extremely unequal, extremely fragmented, and extremely self-centered nation, a fact of which we are all painfully aware….But we successfully weathered that storm once, and we can do it again.  If ever there were a historical moment whose lessons we as a nation need to learn, then, it is the moment when the first American Gilded Age turned into the Progressive Era, a moment which set in motion a sea change that helped us reclaim our nation’s promise….” (16, 19)

[9] The authors want to introduce “a new, evidence-based narrative that encompasses the ups and downs of an entire century, thereby setting a clearer agenda for choice going forward.”(314)   They want a new Progressive Era, when “society experienced measurable and near-simultaneous upswings toward equality, inclusion, comity, connection and altruism…”(316)  So they devote the last chapter to narrating the stories of several mostly forgotten heroes of the Progressive Era. The message is clear: any new upswing will be the result of sustained, grassroots coordinated effort, not the unfurling of some mindless historical inevitability.

[10] A skeptical social scientist or historian might wonder whether their political hope has distorted their argument, squandering the objectivity which serves as the usual anchor of scholarly authority.  I leave this question to others, although as a picky lay reader I will admit to being annoyed by the absence of any measure attached to the y-axis of the mountain.[2]  In any case, the authors do not attempt political neutrality in the broad sense.  Their hope involves no false moral equivalence between downswing and the upswing, between the assertion of individualism over against the rebuilding of community.  Rather they hope for a productive tension: sustaining gains in individual liberty while not compromising on equality and inclusion. (339-340)

[11] However their argument is evaluated by social scientists and historians, I think they escape the condemnation of Dante.  Their heads, after all, are pointed forward to the future and they make no brash prediction that the needed upswing will occur.   Any new “Great Convergence” is going to take the engagement of reform-minded citizens and residents at every level of politics and governance.  Putnam and Garrett provide the most comprehensively data-driven argument imaginable in favor of such involvement.

[12] As a result, The Upswing should be welcome news to members of the ELCA. The 2019 Churchwide Assembly resolutely embraced ‘civic engagement’ in politics.  A Task Force was appointed to define a Lutheran vision of politics under the messy conditions of democratic self-governance.  Already a ‘social message’ has sketched elements of a chastened but sturdy hope in government as God’s gift, a hope anchored in the close connections between God’s two ways of governing.[3]  The hope articulated in The Upswing fits this relatively non-partisan agenda like a proverbial hand-in-glove.  After all, democratic self-governance works only when those who are thereby ruled invest their energy in making it work.  And this text arrives just at a fresh new moment when such civic engagement seems like it might generate meaningful reforms.

[2] Footnote 4 on p. 352 fails to offer an intelligible explanation of why  the x-axis of the mountain remains unlabeled as to what it measures.

Stewart W. Herman is a visiting fellow at the Christensen Center on Vocation at Augsburg University, after having retired from the religion department of Concordia College in 2015.  His Durable Goods (University of Notre Dame, 1997) offers a covenantal account of the relation between management and employees.