The Importance of Talking about Money

[1] Student debt is a rising problem in our society—this is well known. It is also a huge problem for the church, since candidates for ministry in the ELCA likely have school debt. The national average for undergraduate debt has now reached $30,000. Next, tack on seminary debt of any level. Graduates begin their careers with a financial burden that may inhibit their options for serving in the manner to which they feel called.

[2] Much can be done about this. The national church, synods, and the seminaries themselves may work to find ways to lower tuition. Congregations and individuals may give generously to support current and new scholarships. At Trinity Lutheran Seminary, where I am Director of Financial Aid, I try to do something else: I actively encourage students to borrow less money.

[3] That’s right. Part of my job is to talk with financially strapped students and encourage them to voluntarily turn down loan money that is available to them. Why would anyone do that? Well, for a simple answer, see the accompanying chart. Over the long haul, borrowing money can be very expensive. 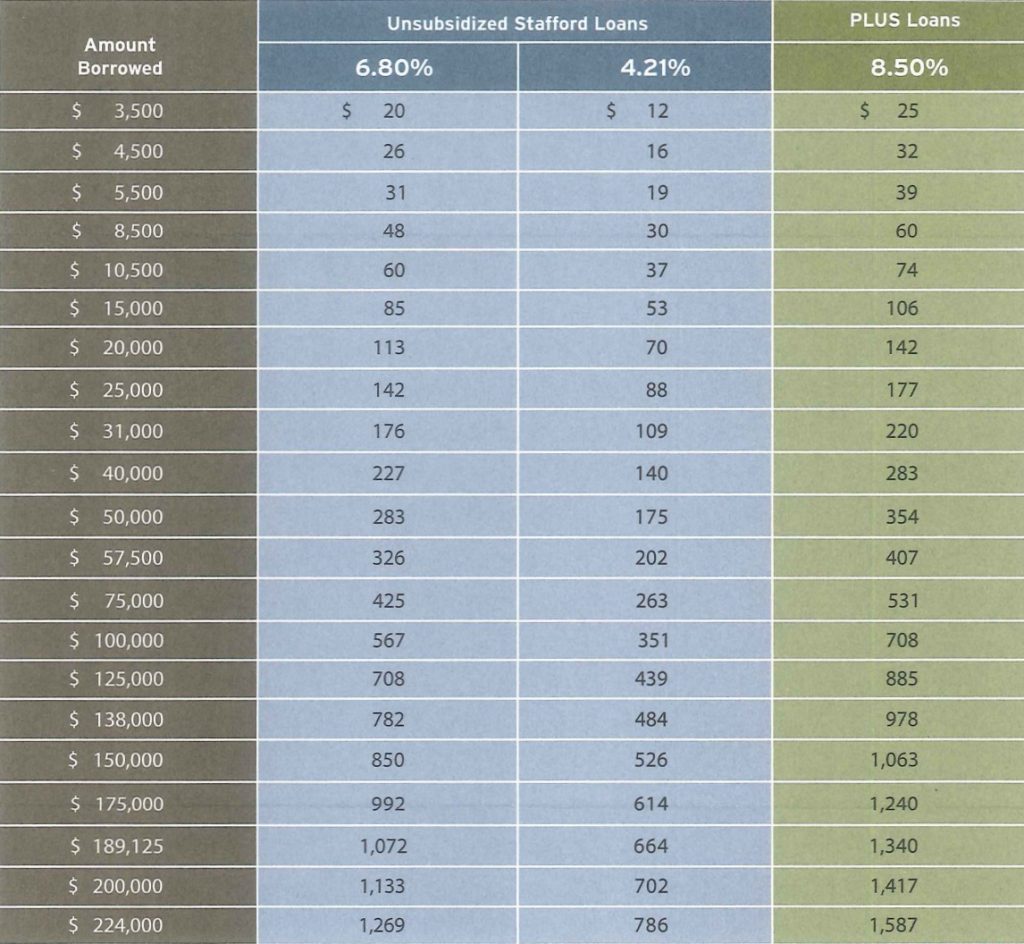 A student realizes they should have an emergency fund. We meet to figure out how the student will allocate money to start the fund. We talk about goals for the fund and when and how to use the emergency fund and how to replenish the fund when using part of the fund for an actual emergency.
Another student and I meet because that student needs to purchase a car next year. We look at leasing vs. buying a car. We discuss how to find a good used car. We look up the dealership CarMax vs. buying from an individual seller. We discuss obtaining financing ahead of time vs. getting financing at the dealership and finally guestimate how much the payment would be in monthly payments and years financed.
Yet another student wants to talk about how to think about repaying any amount of money on student loans from their undergraduate institution. We look up the loans, any accrued interest and interest rates for each loan since rates have been different percentages for different years. Finally, we work out a plan to start making small but regular payments on a specific loan and work out a solution for all of the loans in their name.
[5] Perhaps the most important thing I have learned from these conversations is this: We all need to learn how to talk about money!

[6] Think about when you bought your first car, first house or first anything. Did you have someone to talk over the numbers with other than the bank? How did that work out? I bought a new car once and I was fixated on the monthly payment being below a certain monthly dollar amount and in the end I ended up with a longer loan paying more interest so I could achieve the payment amount. I would do that transaction differently today.

[7] In the church, in our families, and in society more broadly—we all need to learn how to talk about money!

[8] My son (not a seminarian) had a roommate in his last year of graduate school and then for two years in New York City. I asked if his roommate had about the same amount of debt as him. They had gone to the same graduate school and had been roommates for three years. “I have no idea,” he said. “Really? It never came up in casual conversation when you were paying rent or at any time in the last few years?” I wondered aloud. “Nope,” was his response. I thought that was amazing. He thought it was perfectly normal. His roommate was just a friend and, apparently, friends don’t talk about money.

[10] During a financial coaching session last year, I had students in their 20’s and 40’s. The topic of whether or not our families talk about money started an interesting conversation. Most of us did not have memories of money in the house. This session was a “light bulb moment” for the 40 year olds in the group, who realized that they needed to go home and start talking more regularly with their children about money—if they wanted their kids to have a different reality than they had themselves. I hope those students have conversations about money more openly.

[11] Most graduate students have had very little or no financial education classes in college and, if money has not been a conversation at home or with friends, it is easy to see why they don’t know how to start budgeting, or saving, or thinking about their student loans.

[13] As undergraduates, students are simply told what they are eligible to borrow and the money is set up for them as a loan, unless they say they do not want that much money. I have had many, many graduate students tell me that they wish they had been smarter as undergraduates and accepted less money in loans than they were given. So, undergraduate debt rises steadily every year. As a result, entering graduate students typically bring more debt to seminary every year.

[14] When they arrive in my office, there is not much that can be done about undergraduate debt. Also, given the patterns that have been learned, it can be difficult to get students to slow down their borrowing. If they already borrowed $30,000 before they entered seminary—and if payment on those loans will be deferred while they are in graduate school—what difference is another $10,000 or $20,000 this year going to make?

[15] Students who do not come directly from an undergraduate institution often have more awareness of what it means to make monthly payments on those loans. They know what they pay every month and are conscientious about not accruing more debt than necessary.

[16] In any case, I believe progress will only be made when we can become more comfortable talking with one another about money. And it can and occasionally does get easier.

[17] Like everything else, starting something new takes time and practice.

[18] Over the years I have done different things with students. For example, students and I have kept track of how we used our money for a period of time and then reconvened to compare notes on what surprised us in our own spending. When I analyzed my own spending, I realized I ate more fast food than I thought It helped the student to realize that I wasn’t perfect, and this made it easier to talk with each other about money.

[19] Recording expenses helps—today there are many apps that accomplish tracking spending. Talking about the struggles of how to spend our money helps.

[20] Last year a few colleagues and I were having a conversation about the next weekend. One person mentioned they were attending an event and thought they would not spend a lot of money. She spent more than she had planned to spend the previous year and she knew spontaneous spending was a weakness. This confession started a very good conversation between the three of us.

[21] Inspired with that conversation, I made sticky notes for the three of us stating “Don’t purchase stupid stuff!” and suggested we put them on whichever credit card we would be using for the weekend. They liked the idea and we decided we should do this all month.

[22] That was a long time ago, yet the label is still on my card. The temporary sticky note has been replaced with a bright pink plastic label, stuck prominently on the front of the card. When I look at my card it seems to scream, “DON’T PURCHASE STUPID STUFF!” People often comment or laugh when they look at my card and I have had many servers at restaurants or clerks at stores tell me that they needed a label like that for their credit card.

[23] This experiment in “accountability” resulted in great bonding between the people involved and allowed us to confess the times we ignored the label and purchased items we really didn’t need. The experience also allowed us to have other discussions about money during the upcoming months.

[25] Let’s challenge ourselves to begin talking with those around us about what we do with our money—our lack of money and/or our surplus of money. I think we will find that people really do want to talk about this.

Melissa Curtis Powell is the Director of Financial Aid at Trinity Lutheran Seminary.

Melissa Curtis Powell is the Director of Financial Aid at Trinity Lutheran Seminary.